Aquaponics in the New Greenhouse with Tangy Produce 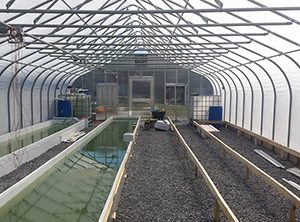 Brian Tanguay will speak about “Aquaponics,” which is the marriage of hydroponics (growing in water) and aquaculture (raising fish) that lets the grower create a complete cycle by raising tilapia in the same tanks where the plants grow. Many of us heard Brian speak last year before his greenhouse was complete and requested a return visit this year to see the new greenhouse system in operation. Brian’s brand new Aquaponics greenhouse has now been completed and is a functioning system. Read more about Brian Tanguay on the web at Aqua man: Growing Shepherdstown farm has roots in water. View Brian’s impressive short videos on the Tangy Produce Facebook page to see winter vegetable growth at his previous greenhouse location.

Brian Tanguay is an engineer and former manufacturing manager who holds a degree from the University of Massachusetts. Brian initially began to garden as a hobby during the time he was working as a manager at Ecolab in Greensboro, NC. Within a year, he created his initial CSA. From there, he began researching growing plants in water and eventually studied Aquaponics at a company in Hawaii. In 2012, Brian’s travels brought him to Jefferson County where he’s established his growing Aquaponics company, Tangy Produce.

Directions: From the 4-way stop in Shepherdstown, take Route 480-S (Kearneysville Pike). Go 4 miles and turn right onto Persimmon Lane. Go 1.3 miles on Persimmon. Brian’s home and new greenhouse are on the right. The greenhouse is visible from the road. Turn into Brian’s driveway through the silver farm gates. Park along the lower driveway and grassy area on the left. From Kearneysville via Route 480, make a left onto Persimmon. From Martinsburg via Route 45 (Martinsburg Pike), look for Winebrenner Road on your right just a short distance from the Jefferson/Berkeley County Line as the road begins a downward stretch. Make a slow, gentle right turn onto Winebrenner Road. In about a half-mile, bear left onto Quincy Lane which becomes Persimmon. In 0.8 of a mile, you’ll see the greenhouse on your left.

Breakfast begins at 9:00 am followed by the program at 9:30 am. Bring a chair and a breakfast food to share, and garden plants for exchange.