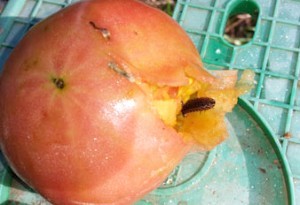 I admit it. I was ready to spray my garden with malathion, DDT, and maybe throw in some kind of incendiary when I saw this guy—see photos—sitting inside my tomato. 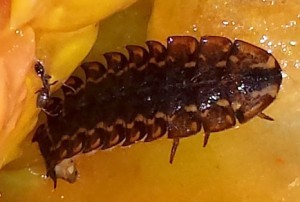 Instead, I wrote to Michael Harman, our Jefferson County Extension Agent, who on consultation with Dr. Frank, suggested it might be a firefly larvae, a beneficial insect that eats other insects and slugs. Most likely, it went after something that got in the tomato after some other creature, probably a bird, pecked it.

Know your garden insects, lesson learned. Many of them are beneficial, no matter how creepy. But what about the (more attractive!) birds? Michael writes, “Honestly, bird netting is cheap and effective. I have a ball of old deer netting big enough to choke a whale in my car trunk. The new stuff is very cheap and available at Home Depot, for example.” Thanks! 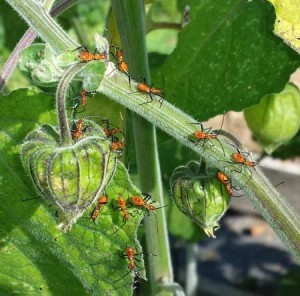 The “beneficial or not” insect ID can go the other way too. Joy! I was the proud host of Assassin Bug nymphs. Or not. Turns out, if you see these in groups, and if they have black spots on their backs, 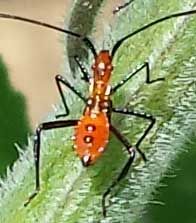 they are more likely something else. Again, from Dr. Frank, via Michael Harman: “They look like leaf-footed bug nymphs. Some species also feed on weedy plant species, so weed management can be effective at controlling overwintering populations. For immediate control the bucket of soapy water is the easiest control because nymphs typically cluster together for the first week or two. This makes it easy to find and dispose of them. Also, they typically do not reach the population size that makes this tactic too time consuming and difficult. Insecticides are the third option. Insecticides in the pyrethroid class work best. For organic growers I would recommend something with the active ingredient pyrethrin.” This particular group did wind up in the soapy water. Sorry guys.