Jane began the meeting with a few administrative remarks: 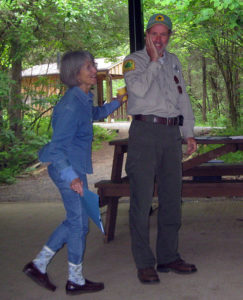 Herb Peddicord received a B.S. in Forest Resource Management from the University of Idaho. He began working for the WV Division of Forestry as a service forester in Morgan County in 2002. His primary duties included all aspects of wildfire control, landowner assistance and inspecting log jobs to insure compliance with the WV Logging Sediment Control Act. He became a “Chesapeake Bay Watershed Forester” in 2008, responsible for the eight Potomac drain counties. He works with the state and local government, local watershed groups, municipalities, non-profit groups and landowners; acting as the liaison between the WV Division of Forestry and the Chesapeake Bay Program. He is currently working with several volunteers on a tree planting project along Tuscarora Creek; at least two-hundred and seventy trees have been planted in this riparian buffer.

The goal of the Chesapeake Bay Program is to “Clean up the Bay.” The program is federally funded through October 2017 under the Clean Water Act run by the EPA. Five states are involved in the Chesapeake Bay Program and WV is considered a headwater state responsible for a 60% reduction in sediment and nutrient (agricultural fertilizer-type pollution) runoff into the Bay by 2017. Computer modeling is used to determine whether pollution reduction goals have been met. One good way to reduce runoff is by planting the riparian buffer zone with native plants such as water-loving trees and shrubs. The plants hold the soil on the bank, use the fertilizer runoff, and the leaf litter contributes to erosion control. Mr. Peddicord is always looking for tree planting volunteers. Other aspects of erosion, sediment and fertilizer control include keeping cattle out of streams through the use of government-funded fencing and by fencing off farm land adjacent to streams. These programs fall under the Farm Services Agency. 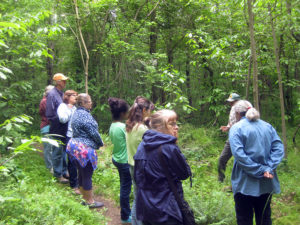 Forest succession is the orderly replacement of plants and animals through time at a given location that leads to a relatively stable “climax community.” Succession is the “earth healing.” Usually the first plants to come into a “bare dirt situation” are the annual plant species, weeds; followed by perennial and biennial plants and grasses which provide good soil protection. Shrubs start to appear after 3-4 years of grass growth. Where are these plants coming from? Seeds are being distributed by animals and birds, falling off their bodies and in their “poop.” The earliest trees to appear are those which have the most prolific or flying seeds and less heavy seeds. Heavier seeds fall close to the parent plant and this type of tree migrates slowly. Trees which produce many light seeds which sprout easily and have few natural predators fill in first. Unfortunately, these first-to-fill-in plants tend to be very hardy, invasive, sometimes foreign species like Tree of Heaven, Autumn Olive, various softwood trees, multiflora rose, Japanese stilt grass and garlic mustard. Over time the development of a soil leaf litter layer allows for the germination of the hardwood species. 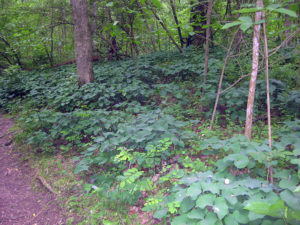 Nature affects succession also, lightning, fires and volcanoes all change forest land. Mr. Peddicord commented that smaller fires are/were a part of nature and serve to reduce the build up of wood and underbrush fuel. Now, in an era of fire suppression we experience extremely large, catastrophic fires due to the fuel build up.

All forests are working toward an end known as the “climax community;” the stable forest community that is successful year after year. Forest succession is related to tree tolerance. Tree tolerance refers to a tree’s ability to grow under shade and to compete with other trees for water and nutrients. Tolerance also varies in trees as they age. Some may be intolerant while saplings and then become tolerant when full grown and vice versa. Forest succession basically progresses from very (shade) intolerant trees to the very tolerant species over time. Very (shade) intolerant species occupy the site first and these are gradually replaced by more and more tolerant species. 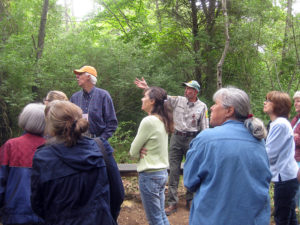 We explored the Yankauer trails with Mr. Peddicord after his talk. The Yankauer Nature Preserve is the perfect spot to observe forest succession in action because of the history of the place. Named after Dr. and Mrs. Alfred Yankauer, 104 acres of rolling farm land was donated to the Nature Conservancy in 1967 and is currently managed by the Potomac Valley Audubon Society. This land has been in transition from grass/farm land to forest for fifty years. The intolerant and invasive plant and tree species (such as multiflora rose, honey suckle, autumn olive and tree of heaven) dominate the forest landscape but several species of early oak and ash trees as well as cedars are also present. Mr Peddicord feels that the climax community will eventually be predominantly Sugar Maple as observed by George Washington in his notes as he surveyed the area over 200 years ago in its pristine condition before it became farmland.