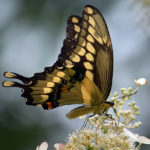 Jane Blash, GEG Coordinator, welcomed the group and spoke about the mission of the group: to exchange information about gardening, to share plants from our gardens with each other, and to enjoy friendship with folks with a common gardening interest. Jane thanked Kathy Dillon for hosting the June meeting and Penny and Larry Stritch for hosting this meeting.

Jane reminded the group to check the GEG website for last month’s minutes if they haven’t yet reviewed them. The minutes were accepted. Jane announced that long-time Treasurer, Larry Kruhm, asked to step down from the Treasurer’s role. Since Jane is also stepping down after 5 years as Coordinator, GEG will need a new Coordinator going into the 2020 season. Jane will be glad to assist in the transition and be available to help with organizational tasks as needed. Since Secretary Julie Neely has moved, a new Secretary will now be needed as well. Terry Thorson will continue as Website Coordinator, and Kathy Stokey-Graves will continue to oversee the Facebook page for the group. Kathy reminded individuals that they are required to sign up for GEG membership before they can access the Facebook page.

Jane reported that GEG has $768.35 in the treasury and passed around a printout of the treasury report. The treasury report was accepted. Since the group first started functioning decades ago before an EIN number was required for social groups, GEG will now request an EIN. Once an EIN is obtained, Kathy and Jane will meet to deposit the funds into a local bank; both Kathy and Jane will register their names on the account so that each of them would be able to separately sign a check for GEG.

Attendees each introduced themselves and spoke briefly of their individual gardening interests. Jane announced that the August meeting will take place on August 17 at the home of Becki and Ed Jones. Ed will speak about “Raised Beds for All Seasons: Planning, Building and Planting.”

To begin the program, Jane introduced Penny Stritch, who showed slides of the many beautiful photos she’s taken of butterflies that visit the Stritch’s gardens. Penny spoke about how certain species are prominent each month during the spring and summer. Penny also matched certain butterflies to the plants they particularly enjoy, such as Swallowtail preferring cosmos and the Silver-spotted skipper enjoying tiger lilies. Butterflies like coreopsis. American Painted Lady enjoy pussytoes and asters for nectar. When a large group of Fritillary butterflies gather on fields of a certain plant such as an aster, it’s referred to as a Fritillary party! While certain plants host butterflies for their nectar, other plants host the larvae and caterpillar of the butterflies. For instance, milkweed is a prime host for swallowtail larvae and the caterpillar stage. Penny pointed out that certain species will stay in a one area through the seasons while others will migrate as the seasons change. The Ocola skipper is one example of a butterfly that migrates.  Penny recommended several books to learn about the numerous butterfly species and particularly likes Butterflies Through Binoculars: The East — A Field Guide to the Butterflies of Eastern North America, by Jeffrey Glassberg.

Following Penny’s presentation, Larry Stritch, retired Biologist for the US Forest Service, invited the group to join him on a tour of their extensive gardens. Larry pointed out an unusual flower that many in the group hadn’t ever seen before called an Indian Pink (Spigelia marilandica). Larry demonstrated his seed starting process for three varieties of sedge (Carex): Pennsylvania Sedge (Carex pensylvanica), Bicknell’s Sedge (Carex bicknellii), and Bebb’s Sedge. Larry uses an electric drill fitted with a bulb-planting-sized auger for drilling each hole for the seedlings. He described his seeding schedule and begins to transfer his seedlings from the greenhouse to the outdoors from mid to late April. He showed the group samples of the developing sedges. The group walked the Stritch’s extensive property and viewed Larry’s native plant beds. Larry pointed out and described his numerous plant species, including Bee balm (Monarda fistulosa), Poppy Mallow, Mink pycnanthum euticom, Swamp Milkweed (Asclepias incarnata), Great Blue Lobelia Siphilitica, Sweet Brown-eyed Susans (Rudbeckia triloba), and Native Hyssop (Agastache foeniculum), to name a few. The group adjourned at 11:30 am.