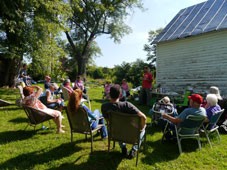 Another wonderful meeting!  Families without gardens reap the benefits of one man’s very hard work under a program called Community Supported Agriculture (CSA).  You and I can appreciate this because we know what it takes to care for our gardens.  Take your little garden and magnify it into three or four acres.  We asked David Siripoonsup (the one man) how many hours he spends in the garden and he said he didn’t count them – morning until night.  He has a tractor that only works occasionally and a tiller.   The landscape is rolling hills filled with boulders. 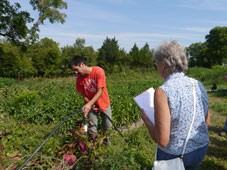 To say that David is amazing is an understatement.  It is an obvious labor of love.   Under the co-op, David and his partners Bill and Victoria (who had to take outside full-time jobs) provide 35 families with fresh garden products 22 to 30 weeks a year.  This includes fresh herbs.  They have been at the farm for seven years and in operation for five.  They built their own greenhouse and use a wood stove to heat it in the winter.  They actually have built two houses but one does not have heat or fans and therefore can only be used for a short time. 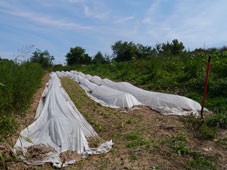 Seeds are started in February and David continues to start seeds up to July.  He grows products up thru December using the greenhouses.  His last starting of seeds in the greenhouse is in September.   He plants winter squash and pumpkins in July for fall production.  David uses very few pesticides.  What he does use and works well for him is row covers.  He covers the rows as soon as he puts the plants in the ground or sees the seeds coming up.  In many cases he leaves the row covers on until the plants break out of them.  If they need to be pollinated (and he has a neighbor who has bees), David uncovers them after they flower.  The hoops are placed at an angle across the rows.  David gets most of his materials including his irrigation system from a place called Rain Flow located in Pennsylvania.    Excluding corn, David tries to grow a wide variety of vegetables.

We asked David to recommend varieties and the conversation turned to turnips.  He suggested Hakurei.   He personally likes regular turnips (YUCK!) but his customers prefer the sweeter variety.  He grows a lot of heirloom tomatoes and unusual things like celery root and kohlrabi.  He has had to modify the soil with lime but mostly just uses cover crops to amend the garden.  Rye is the preferred cover crop for winter and buckwheat in the summer.  Winter peas and a summer crop of cow peas are a good source of nitration.

What do you do about aphids?  Stress brings aphids.  Thin your plants and weed well.  If plants are aerated, it helps prevent them.

What about pests of the four-legged variety?  There is a seven-foot fence around the property.  Once in a while a deer gets in but the dogs scare it away. Groundhogs you shoot.  You can try gum but few have been successful with it.  There is enough to share with the rabbits, and again the dogs love chasing them. 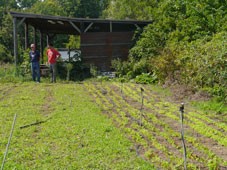 Water is the most important thing, and David uses a drip irrigation system that runs under the black plastic in which he plants.  He lets it drip for about two hours a few times a week.   He waters different areas at different times depending on the plants’ needs.  The drip irrigation system is the most efficient but he also has a sprinkler system that he uses where he has just planted seeds until they start to come up.   We saw this in an area in which he had just started salad greens.  He then moves in the drip system and row covers. 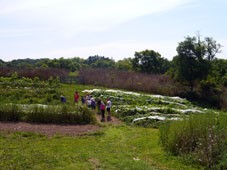 It was wonderful to look out over the rows and rows of vegetables.  Unfortunately, you had to question who was winning the battle against the weeds but we all know what that is like.  Multiply your experience with the weeds ten times and think about the fact that there is one man doing it all.  Again David is an amazing person.

There is always so much to do on Saturday and if I were not the coordinator I probably would miss a lot of these meetings but I couldn’t enjoy anything more than I do the wonderful camaraderie and pleasure of seeing and learning about so many different things.  It is worth putting these meeting on the calendar for every month and making them a priority.

Breakfast, as usual was outstanding.  It was a lovely day to sit in Bill and Victoria Madert’s back yard and talk about our favorite subject.  There is no change in our treasury.  Terry talked about our website and said that if you had anything to share just go to the GEG website and go to Contact and send it to her–she will post and email it out to everyone.  We all talked about Jane’s giant lilies.  Mark brought fig trees that were as tall as me and said that they don’t produce until September and the deer don’t bother them.  He also brought ever-blooming strawberries and thornless blackberries.  Betty brought roots for Bridal Wreath Spirea and a grass.  Jane brought pink primroses and Larry brought us all tomatoes and green beans.  Dianna said if anyone would like perennial begonias, she would be happy to bring them to the meeting.  Just let her know.  Gary and Renny still have bags of horse manure if you need some.   Cindy brought lovely recipe cards with the recipe for patty cakes made with patty pan squash that she brought for breakfast.   She is an artist.  You meet such interesting people at the Garden Club.  She said the cards were great for gifts and parties where you take a dish and the recipe.  Check out They Draw & Cook.  You can take a picture and put your own recipe on it and print it out. 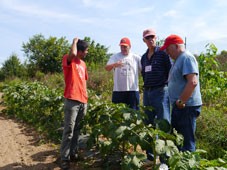 Next month’s meeting, September 21, will be at the Jefferson County Orchard and Ronald Slonaker will talk to us about the care of fruit trees.  See you then!