Intro to the Speaker — Brian Tanguay

Mr. Tanguay is an engineer and former manufacturing manager who holds a degree from the University of Massachusetts. Brian initially began to garden as a hobby while he was working as a manager at Ecolab in Greensboro, NC. Within a year, he created his initial CSA (Community Supported Agriculture). From there, he began researching growing plants in water and eventually studied Aquaponics at a company in Hawaii. In 2012 Brian’s travels brought him to Jefferson County where he’s established his growing Aquaponics company, Tangy Produce. His produce is sold at the Charles Town Farmers Market on Saturday and the Shepherdstown Farmers Market on Sunday.

“Aquaponics,” the Marriage of Hydroponics (growing in water) and Aquaculture (raising fish)

This relationship lets the grower create a complete cycle by raising tilapia in the same tanks where the plants grow. Brian’s new Aquaponics greenhouse is now completed and is a functioning system. He explained that the growing season isn’t limited to when the weather cooperates. It is a complete cycle — the waste from the fish becomes a biological fertilizer and plants filter the water for the fish. He said he brings a painstaking attention to detail and a focus on efficiency to his farm work. 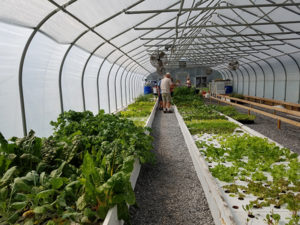 Tanguay began by researching growing plants in water so that he could farm year-round in any climate and make the most of every square inch of available growing space. Aquaponics uses just 10 percent of the water that is needed in traditional farming. He doesn’t have to spend money on fertilizers, but uses nitrate-rich waste from the tilapia to help his plants grow. The plants, in turn, filter the water for the fish. The waste from the fish becomes a biological fertilizer — and the plants being fertilized filter the water for the fish.

These growing methods allow him to forego the use of pesticides and other chemicals. Customers tell him they appreciate the chance to buy such clean local food. He hears, time and again, that his food has a wonderful intensity, a really good taste. Food raised through aquaponics reduces the risk of exposure to e. coli and salmonella, he said.

Brian uses the benefits of “Deep water culture” — plants floating on rafts in troughs in the floor of the greenhouse. His methodologies create a balance of fish to plants and he never has to change the water. Fish, plants and (good) bacteria are in balance. The plants are in all stages of growth — seedlings to grown plants which are then harvested. The plants grow faster, as less energy is expended growing in water than soil. The plants are intensively packed in trays which allows for greater efficiency in growing more produce.

He described the processes he has developed in minute detail, such as his decision to use tilapia rather than catfish in his greenhouse because tilapia are top feeders and are fast growing and hardy. He explained the technical methods he employs: water temperature, pH, lighting, depth of troughs, the proper balance of fish to plants, and more. 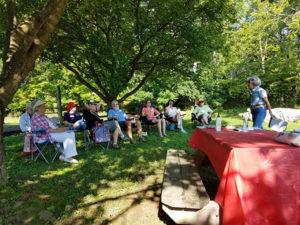 He also described the intensive work that is necessary to keep the proper temperature in the greenhouse, as with the around-the-clock feeding of wood into the furnaces which provide heat during very cold weather. He has installed electronic sensors which measure air and water temperature to assist him in maintaining proper temperatures throughout the year, in all weather.

Not only is his business labor intensive, it is extremely capital intensive. Yet he continues to refine, improve and expand his very complex farming methods. He has created a unique farming system which provides outstanding produce to the community.

After his discussion of the history and processes employed in his unique and highly successful business of providing quality produce to the community he led an extensive and descriptive tour through the greenhouse and the recent farm of chickens, rabbits and ducks that he is now raising. All in all, it was a most interesting and educational day.