The meeting was held at the lovely home and garden of Carol Grant. Carol has just completed the installation of a large butterfly garden which is sure to please pollinators of all sorts with its fragrant, beautiful flowering plants as it matures for years to come.

Jane began the meeting with a few administrative remarks: 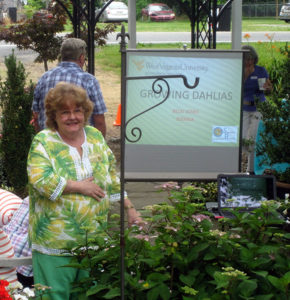 Mrs. Becki Jones is a multi-talented person — a retired music teacher, now a member of the National Capital Dahlia Society, a West Virginia Master Gardener and Naturalist. She works in the Life Long Education Department at Shepherd University and maintains a certified monarch weigh station and bird habitat at her home, and this is only a partial list of her interests and accomplishments. Becki was introduced to Dahlias by her grandmother but as a child she found the flowers somewhat “boring.” It was later in her adult life that she says the “latent Dahlia gene” expressed itself and now she enthusiastically grows and cares for over 150 different dahlia plants at her home. 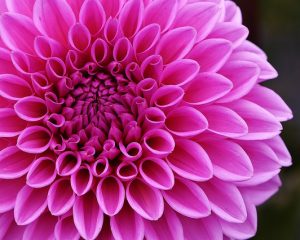 Dahlia is a genus of bushy, tuberous, herbaceous perennial plants native to Mexico. A member of the Asteracea (or Compositae), dicotyledonous plants, related species include the sunflower, daisy, chrysanthemum and zinnia. There are 42 species of dahlia, with hybrids commonly grown as garden plants. Flower forms are variable, with one head per stem; these can be as small as 2 inches in diameter the “Lilliput” variety or up to 1 foot the “Dinner Plate” variety. The stems are leafy, ranging in height from as low as 12 inches to more than 6–8 feet. The majority of species do not produce scented flowers. Like most plants that do not attract pollinating insects through scent, they are brightly colored, displaying most hues, with the exception of blue. Pollinators such as bees and beetles are attracted to dahlias but butterflies seem to ignore them. The dahlia was declared the national flower of Mexico in 1963. The word Dahlia means “valley flower.” Tubers were grown as a food crop by the Aztecs but recent attempts to reintroduce the tubers as a food crop have been unsuccessful. Dahlia plants were brought from Mexico to the Botanical Gardens in Madrid towards the end of the eighteenth century and named in honor of Andreas Dahl, a Swedish scientist and environmentalist. Dahlias contain the chemical compound inulin (not insulin). Prior to the discovery of insulin in 1923, diabetics were often given a substance called Atlantic starch or diabetic sugar, derived from inulin, a naturally occurring form of fruit sugar, extracted from dahlia tubers. Inulin is still used in clinical tests for kidney function. 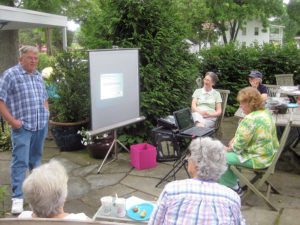 Dahlias require a sunny location with 6-8 hours of sunshine a day. The tubers can be planted after the first frost and are NOT cold hardy. They are very sensitive to chemical insecticides and herbicides – best to avoid using those products and hand weed around dahlias. The tubers should be planted 4-6 inches deep and 18-24 inches apart; keep the tubers on the dry side when initially planted and then water vigorously once you see green shoots and leaves. Too much water early on could rot the tubers. They require a soil pH of 6.5 – 7 and are “top feeders”, so just sprinkle the fertilizer on top of the soil. They need low Nitrogen fertilizer in a ratio of 1/2:1:1. They don’t like much mulch either which could provide a hiding place for snails and slugs which are their primary pests although they are susceptible to spider mites and Japanese Beetles as well. You might try slug bait even before the tubers sprout as pests will eat the newly emerging shoots. If pests are a big problem try covering the plants with white agricultural cloth (light weight) to keep bugs off the plants. Dahlias should bloom in August. Many dahlia varieties grow quite tall (5 ft.) and require sturdy staking; expect multiple flowers (up to 20) and re-blooming from each plant. When you cut dahlias for display, do it in the morning and dip the stem into hot (to the touch) water to prolong vase life. If you want more flowers per plant you can try pinching out the center bloom to encourage side shoots – this practice is not required. There are many cultivars of dahlias to choose from based loosely on flower shape; the following is an abridged list: single, anemone, collerette, pom-pom, waterlily, decorative dinner plates, ball, cactus, semi-cactus, double orchid, peony, fibrillated, star and miscellaneous. 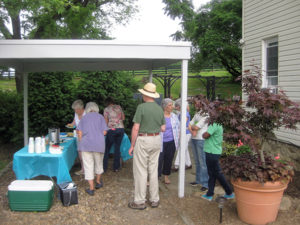 Dahlias must be dug up before a hard frost comes, after the plants turn black/brown. Dig the tubers out of the ground carefully (try a fork spade), brush or wash the soil off them, let them dry off and store them in a cardboard box filled with perlite or mulch or moss (whatever you have handy) in a cool (40-50F), dry, dark place. The tubers can be divided, after you dig them up, to make more plants by cutting through the “crotch” of a clump of tubers with a sharp knife. Try to ensure that the pieces you cut off contain an eye – the little growing part that grows up towards the sky. Consider labeling each tuber by name with a marker at this stage. More detailed information is available on the internet.